Whistle Stops: A Locomotive Serial Poem occurs over a series of train rides between Toronto and London, Ontario. Each segment of the poem, marked by a time stamp and train number, occupies one train ride. Jack Spicer’s concept of serial poetry combines with Charles Olson’s “projective verse” in a dynamic that resembles the momentum of a train as it carries the poet speaker toward and away from her love interest. Whistle Stops is also informed by Philip Larkin’s “The Whitsun Weddings,” Thomas Hardy’s “On the Departure Platform,” and Allen Ginsberg’s Iron Horse, works in which these male poets incorporated the train as phallus image into the railway poem tradition. Even so, Izsak responds to critiques of the poetic movements she clearly reveres with unbridled (and surreal) female sexuality. In “Nov. 12th 72 to London 16:36,” she writes, “Oh train / it is strange for your shape / that I / am inside you”. In Whistle Stops, sex—like rail travel and serial poetry—hurtles forward in non-narrative fashion, as a rhythmic train of thought offset by purely poetic spasms. Whistle Stops is not a reaction against the railway tradition or the Olsonian tradition, but an unapologetically female addition to a movement that is and should be still in motion. 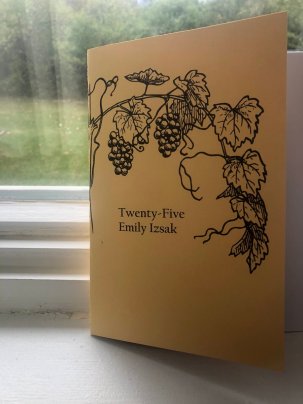 Twenty-Five is a chapbook published by above/ground press that was intended to abstractly chronicle the poet’s 25th year in 25 poems. Although the final product contains less than 25 poems, the poems are not numbered so you wouldn’t know that unless you counted (or unless you were informed as such). The grapes on the cover are significant, but to find out why you’re going to need to read the book.

As a friend of Izsak’s pointed out after the title of this chapbook had already been selected, Stickup refers, in part, to Toronto, which comes from a Mohawk word meaning, “where there are trees/sticks standing in the water”. Stickup is connected to Toronto in so far as it was written there by a Torontonian who attends the University of Toronto. Also, it frequently alludes to streets and landmarks within the city. But the title carries with it many other subtle undertones, some of which include armed robbery, friendship, popsicles, and “your butt”.